I initially chose to review Mission Cooling Towels exclusively today because it’s one of the more impressive cooling towels when it comes to day-to-day usage. Unlike other of its kind, Mission cooling towels have a minimalistic appearance and it saves you the unwanted attention from people around you.

Mission cooling towel has a minor presence while it’s on your shoulders or anywhere else. Unlike any other cooling towel, Mission cooling towel is light like a napkin that you would get from a high-end restaurant in Las Vegas. The reasoning of my comparison has a lot to do with the quality and the build of the product and the feel and comfort it provides.

Mission cooling towels have a premium look to them and they feel just as good. The visual design and the variations of the styling add a lot to the Mission towels.

There are many Mission cooling towels out there. In fact, there are too many to wrap your head around. Each of them has its specialties, though there are some Mission towels that are pure niche and not worth considering. Now on to the review.

Below are some of the most popular Mission cooling towels and my personal opinion of them. 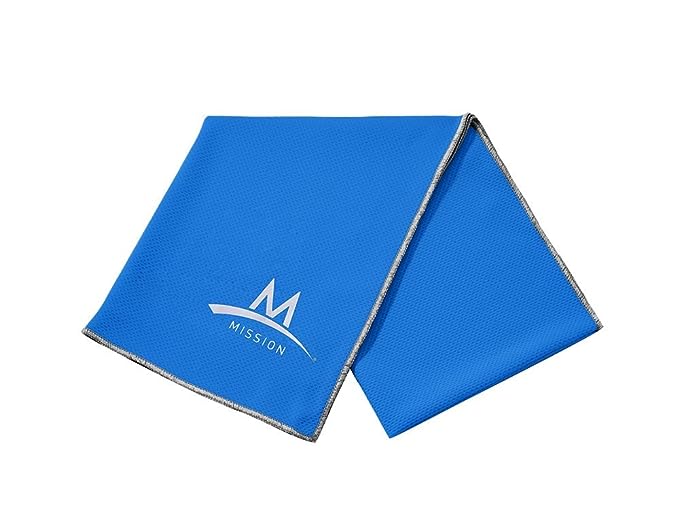 Also known as the ORIGINAL COOLING TOWEL from Mission. As the name implies it is indeed the very first cooling towel from Mission and it is a fan favorite. It is made from a soft, smooth, and durable brushed microfiber, maximizing comfort. It usually takes around 30 seconds to activate once soaked in water. Each usage should last around 2 hours but as per my experience, the Mission original cooling towel lasted somewhere around 1 ½ hour, which is pretty damn good. Depending on humidity and temperature, that time is subject to change, so take all I say as a rough estimate rather than a guide.

Durable brushed microfiber which is soft and smooth. The fabric consists of 90% Polyester/ 10% Nylon

Good. Each of the Mission towels last for a long time and you hardly ever need to think of durability as a concern.

Great color variation with the addition of printed skins.

Mission Enduracool Cooling towel has decent absorbency but not as great as the Frogg Toggs cooling towel, so it doesn’t last as long during each usage. That’s a huge contributor to Mission towels being lighter and more comfortable in general. It’s a trade for a trade, as they say.

Mission Enduracool is a totally chemical-free cooling towel, so it’s reusable and it never washes away. It can be cleaned using a washing machine. It also provides UPF 50 protection from the sun. Enduracool Mission towel is very portable and it always stays soft, whether it’s dry or wet.

The only minor issue with Enduracool Mission towel is that it doesn’t last that long depending on the ambient temperature and humidity, although as long there’s water nearby it should not be a problem. 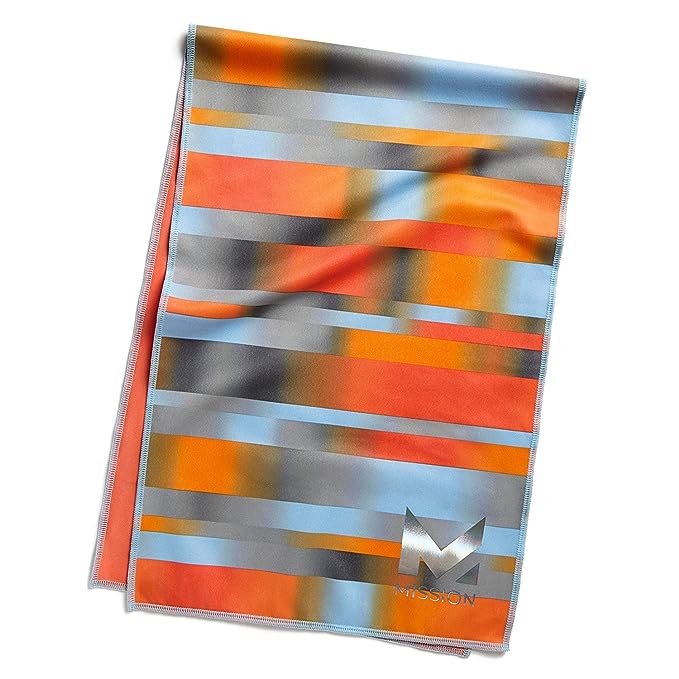 The Fabric content consists of 61% Polyester / 30% Nylon / 9% Spandex
Pattern Fabric and its contents are 83% Polyester / 9% Nylon / 8% Spandex. A good mix of materials and soft texture gives it a good material score especially because it’s very comfortable like the original.

It has the same durability as all other Mission towels, meaning it lasts a long time and the durability factor isn’t something that should concern you anytime soon.

All Mission towels have a huge spectrum of color and design choice.

Not too great. Worse than the original and is somewhat of a hassle for day-to-day use.

Gives off a more powerful cooling effect than that of the original one but that’s about it. Most people won’t even feel that much of a difference so it has not much going for it.

Lasts for a shorter amount of time and in some cases performs worse than the typical Mission towel. 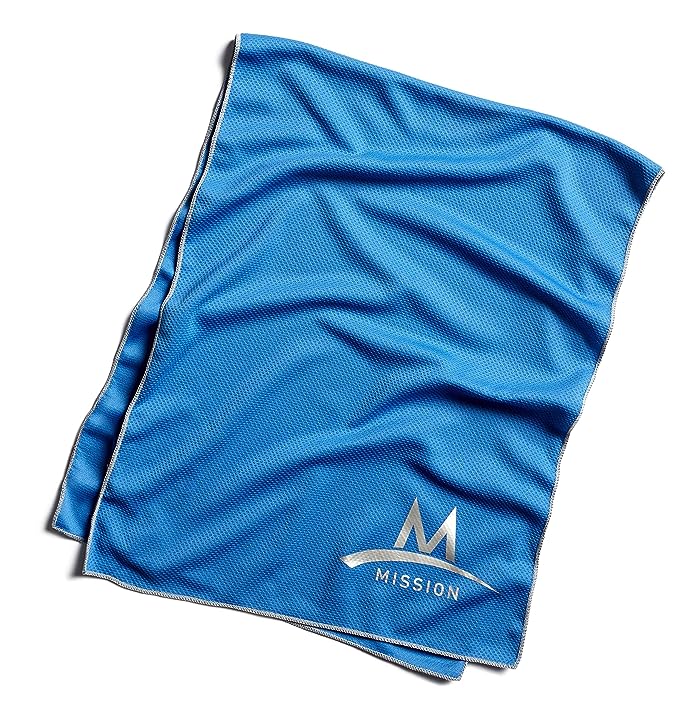 This is definitely one of the best cooling towels you can get at the moment. It has all the same features of the original Mission cooling towel but with lesser weight, maximizing comfort. The premium cooling towel is very light and it still manages to attain its power of cooling like the original. The secret, however, lies in the build material of the Mission premium cooling towel which is made with the Premium Stretch Knit fabric and it also has no seams and coupled with fine texture it really puts the emphasis on comfort. The Premium Stretch Knit fabric is the new line for Mission, which is doing the same thing as the microfibers while being lighter and cheaper.

You can have this cooling towel hanging on your neck for hours without getting your clothes wet. It doesn’t even leave a hint of moisture. Mission premium cooling towel really lives up to its name. It actually feels premium and has a great performance to boot. You will most likely never choose another cooling towel after owning one of these, and that’s not an exaggeration.

The fabric used is 100% polyester. Mission uses their Premium Stretch Knit fabric for making their premium cooling towel, which is latest on their line-up. By far this is the one that works best and also feels most comfortable. It easily ranks up on the high end of the spectrum.

All of the Mission towels have great durability and their latest release measures up along with the rest in the durability department. Some would argue their premium cooling towel is the more durable fabric.

Same as the rest of the line up, so it already gets a good rating by default.

Considering how light the premium cooling towel actually is, the absorbency is fascinating and the fact that it doesn’t feel heavy even after soaking up water is another plus.

It has a decent cooling towel feature with the added bonus of being super light and comfortable. The makers got so many things right with this one that it is somewhat of a no-brainer. The towel never becomes hard even after drying. The texture is great and overall checks all the right boxes when it comes to cooling towels.

Honestly it is hard to find much of a negative vibe with this one. It would be better if it lasted a bit longer than it originally does, but that’s just me nitpicking.

It is one of their rare products and is an online exclusive at the moment. It is said to be the most versatile, having a dual-sided cooling mechanism with a soft, absorbent terry side which will dry when needed. It has an ultra-soft cloth fabric that wipes away sweat and the cooling side instantly cools when activated with water for up to 11 hours. I still haven’t had any experience with this one, as it is exclusive. So, take everything with a grain of salt and don’t be surprised if some of the claims don’t live up to your expectations.

Now on to the Frequently Asked Questions Section. I will be describing how to use mission towels, how they work, how to store them, and some other nitty-gritty details which will come in handy in the long run.

How to use the Mission Cooling Towel?

The very first thing to do is get some water. It’s best if the water is clean since the towel will be hanging around your body and most tap waters are safe enough for that case. Wet the cooling towel using the water, and make sure to soak it well. Get rid of all the excess water that is soaked up in the towel. You need to wring out the towel 2 to 3 times, making sure you have no excess water in the towel. After that, just put the towel on or wrap it around your forehead or your neck, and you are ready to go.

How does the Mission Cooling Towel Work?

It works quite simply. It uses and enhances the natural process of evaporation to emit a cooling effect. Once soaked, the cooling towels instantaneously start to evaporate the stored water and that’s why you feel that cooling sensation.

How to wash the Mission Cooling Towels?

Again, it’s very easy. You just put it in the washing machine and it does the job for you. However, I suggest washing it by hand. Either of the ways is fine and shouldn’t come with any problems later on.

How to Store Mission Cooling Towels?

It is common to store cooling towels in the tube they come with, but in this case, I caution you against it. Especially because the Mission cooling towels never get hard but keeping them in the tube can cause some minor problems. However, as long as you don’t put them in a tube for too long it should be fine just as long as you make sure the towel is completely dry when you are storing it in there.

As an Amazon Associate I get commissions for purchases made through links in this post. No extra cost to you